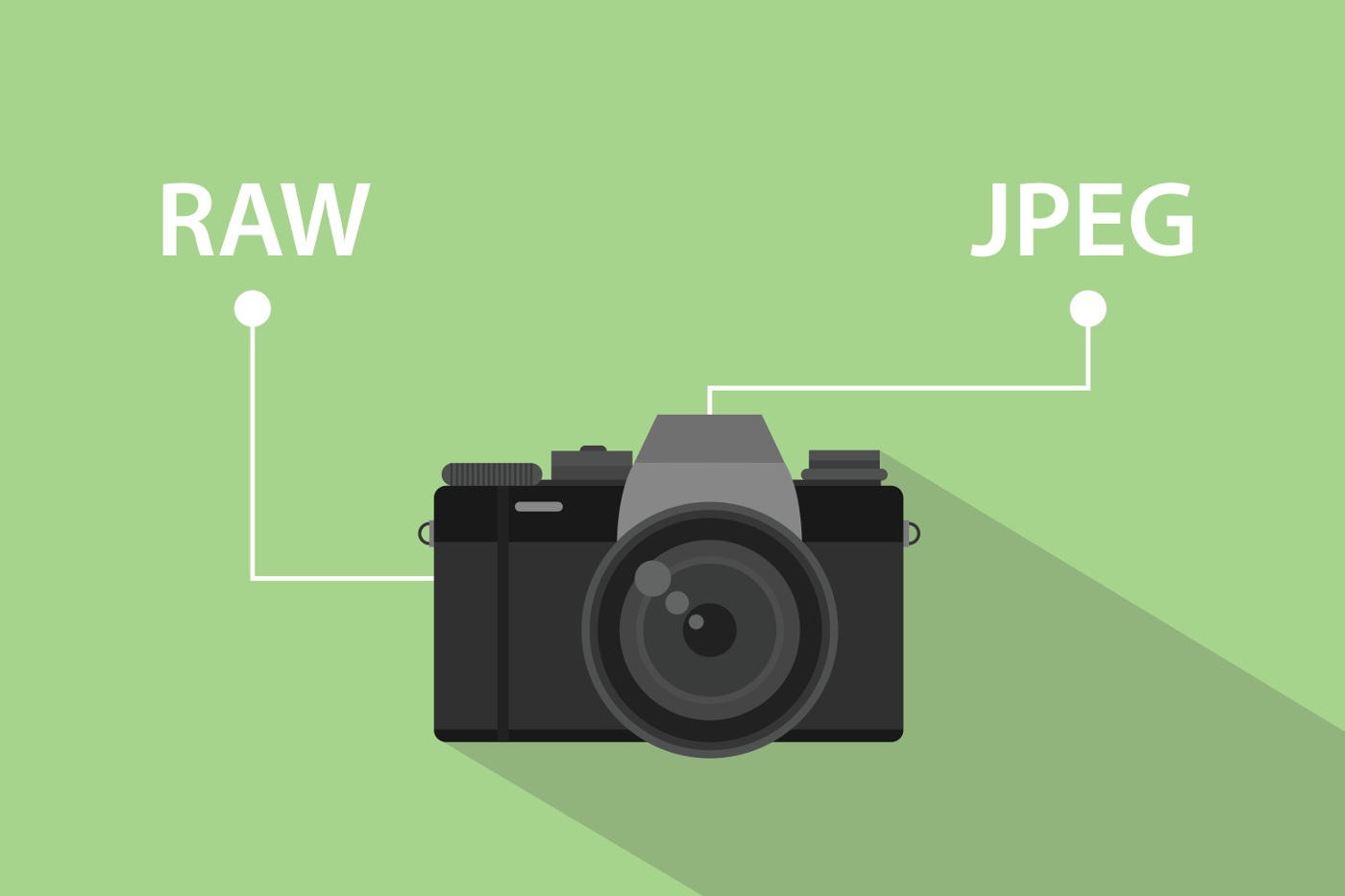 If you’re not sure of the difference between raw vs jpg file formats, or you may be new to the raw file format. Read on to have your questions answered.
Raw or JPEG? If you are serious about taking photographs, the choice between these file types is a topic you need to be aware of and educated about. Whether shooting a mirrorless or DSLR – even some digital point-and-shoot cameras – the option to shoot in either file format is there. But why? Which is better? Well, let’s start off by establishing what RAW and JPEG actually are before comparing.

What is the difference between JPG and JPEG

I just want to clear this up; JPEG and JPG are the same file type. The extension .JPG was a shortened form of .JPEG used in Windows operating systems before four-character extensions were supported. The terms “JPG” and “JPEG” are used interchangeably and refer to the same image compression scheme.

JPEGs are a type of compression for digital images. JPEG is actually an acronym for “Joint Photographic Experts Group”, a committee that started developing the means for transferring and displaying digital images in a standardized way back in the early 1990s.

JPEG uses “lossy” compression, meaning that information is lost each time the file is compressed or manipulated. When you save a JPEG, or create one in your camera, you are compressing the image. It is designed to be most effective at compressing images depicting smooth tonal transitions – graphics, or photographs – but, due to the means by which it compresses the image data, it is not particularly good at hard lines.

JPEG has become popular due to the relative high fidelity and viewability of the images despite great reductions in file size thanks to the compression. This is especially valuable in sharing images over the internet, where the quickest presentation times are often the most desirable. JPEGs are able to achieve this first by compressing color information and luminance, then compressing each of these channels further into a minimum of 8×8 blocks. Without getting excessively technical, JPEG compression uses formulas to get a sort of average color of the 8×8 (4.2.2) or 8×16 (4.2.0), etc, reducing file size – it will also compress some luma detail, especially as the “quality” gets lower. JPEG gives data preference to the luminance channel, separating the RGB color space and converting to YCbCr, where the Y is luminance. Because the human eye can perceive small changes in brightness more keenly than color, luma is given priority over color.

What is the average JPG file size?

This depends mostly on the megapixel rating of your camera and the level of compression. The file size between individual photos can vary a lot too, depending on the colours and shapes within the images, due to how compression works.

For a Canon 700D DSLR camera with 18 Mega-pixels, set to ‘fine’ mode (maximum image quality), JPEG images are around 5MB-10MB.

What is the average RAW file size?

As with JPEG mages, RAW image file sizes depend on the megapixels of the camera. Which makes sense; more pixels means more information from the sensor.

Since they have no compression, RAW images have much more consistent file sizes. For a Canon 700D DSLR camera with 18MP, file size is around 11-12MB.

Raw is a term used for a collection of different file formats which seek to successfully record an uncompressed and lossless file from the camera sensor. RAW files will record color at the bit-depth which the sensor has recorded, and will contain no elements of pixel averaging or color compression. Most major camera manufacturers use proprietary RAW file formats, although some use more standardized formats such as DNG.

RAW is often referred to as a ‘digital negative’ – despite being a positive image – as it has a parallel function to a film negative. Digital negatives require “development” to be usable and viewable on most devices and software. The RAW file also will remain unchanged despite editing – edits will either be saved to the metadata or a separate file. Although some camera manufacturers and firmware versions do more, RAW typically does not compress or remove any information, with the exception of “defective pixels” (pixels generated through sensor noise).

“Due to the uncompressed nature of the format, RAW files are many times larger than their JPG equivalents – and contain much more detail.”

Due to the uncompressed nature of the format, RAW files are many times larger than their JPG equivalents – and contain much more detail.

RAW files are superior to JPEGs in sheer terms of quality, integrity, and value of information. They are always going to be as they come uncompressed and without preset sharpening, brightness adjustments or contrast adjustments your camera will automatically assign to JPEG. Now, despite the advantages of RAW over JPEG, there are occasions where it will be ultimately more advantageous to shoot JPEG or, as I personally prefer, RAW+JPEG.

JPEGs come ready to view out of the camera and do not require digital development, which can be extremely time-consuming if you are shooting a large number of photographs, In which case, it is nice to have JPEGs created immediately in the camera for sharing, especially over web. JPEGs are often usable if you get the right exposure, especially over the web.

JPEGs are also sometimes preferable when you need to shoot large, rapid bursts – because of the smaller size of the JPEG images, most cameras will allow you to fire off more shots in continuous shooting mode before the buffer on the camera is exhausted and a pause is required in order to begin shooting again. In this mode, obviously, one would shoot JPEG and not RAW+JPEG, as the total amount of data created is usually the limiting factor.

Also, if you are shooting images more casually, where tonal depth or exposure aren’t necessarily important, or if you are particularly low on storage media, JPEG can be the solution. Having said that, if you would like better results and you have limited space, I would suggest shooting in RAW, then setting the brightness, sharpness, etc for each individual photograph in the camera to compress to JPEG, then deleting the RAW, as it will give you more control over the final compressed image.

If you are shooting directly to JPEG, as previously stated, your camera will automatically sharpen and add brightness and contrast to your image when compressing. Some cameras allow this to be set by the user but usually comes standard with around 25% increase in sharpening, brightness and contrast. I prefer to have that control myself over each image individually if possible.

Outside of the obvious advantage in more bit depth with RAW – JPEGs only can save a maximum of 8-bit; your camera likely records 12 or 14 bit – the more gradual tonal elements and the ability to avoid clipping (in most shooting situations if the exposure is correct or near to it) are very valuable. You may shoot in JPEG for months and never have an issue until you come across a poorly lit room or an overexposed image.

Highlight clipping is very common and frustrating in JPEG, which gets especially bad when you consider the default brightness and contrast settings your camera probably uses. Also, under-exposed images, which do not have the advantage of the wealth of data a RAW image has, will reveal incomplete color information and excessive noise if you try to push the exposure. These issues may not have happened to you yet, but the more aware you become of your image’s integrity, and the more you shoot, the more likely you will have that shot you WISH you could save, but the JPEG just won’t let you.

“My advice is, shoot in RAW unless you CAN’T. You can always make JPEGs from the RAW files, but not vice-versa”

In addition, if you intend on editing the photographs, you will have successive compressions with each edit. This will cause the image to lose fidelity and compression artefacts will degrade the quality of the image. My advice is, shoot in RAW unless you CAN’T. You can always make JPEGs from the RAW files, but not vice-versa.